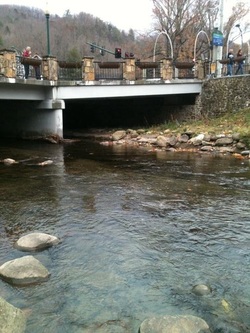 I am really enjoyed being with you in Gatlinburg, Tennessee, spending time with you, family and friends is a blessing! Your father discovered, through your mother, a wonderful family. This story is my way of explaining the joy of family and how the past two Thanksgivings have been such positive times in our lives. In another story I explained my first Thanksgiving memories with your mother’s family in Gulf Shores Alabama. It was not likely, I thought. that the Thanksgiving vacation of 2011 could be any better. Oh me, of too little faith, the wonderful Thanksgiving vacation of 2011, occurred again, and was just as memorable and joyful, in 2012!

On Friday, November 23 when I was fishing in downtown Gatlinburg, Tennessee, some clarification on why these wonderful times have occurred became as clear to me, as the mountain water I was wading in! On this beautiful day, late in the afternoon, I was disconnected from the material world and in a spiritual place that seemed to change feelings of my body in a way, that made the cold water of no discomfort to me! I was wading in my blue jeans when I heard a voice asking if I was cold? It was a woman crossing the trout stream on the bridge above me. I may have answered that “I felt good”, but I am not sure what my reply was or if I really said anything to her. Then after the passerby asked if I was cold, I looked around in amazement, seeing the throng of tourists shopping and seeing the sights of Gatlinburg, while I stood nearby, in a trout stream that ran through the middle of the popular tourist location! I was intrigued by this most unusual fishing environment, but I was focused on my quest for a deeper pool with trout and continued wading. I approached two people fishing on the west bank, past the busy bridge. The two fisher people seemed as surprised as others, that I was in the stream on a late November day. I asked them if I could join them at the location where they fished. The man was cordial and answered that it was fine with them and I should join them. I climbed up the bank and sat on a rock elevated above the lower flat stone where I took off my shoes and wrung water out of my socks. I tried to dry a bit and rested in their company. I discovered the pair were father and daughter, and began conversation with something like, “I have a daughter who used to fish with me when she was your age” (referring to the age of twelve - thirteen year old girl fishing with her father). The father of the girl pointed to some trout in the stream and asked me to try my luck catching one. I accepted his invitation and after a few casts hooked a very respectable trout. After I landed the fish, I asked them if they wanted it? The girl replied, “Yes, I want to cook fish for my dad for supper.’ I noticed they had a couple of smaller fish on an improvised stick, that somewhat held the fish. I thought about the home made stringer in my pocket. It was the product of improvisation from morning fishing with my son Patrick. Early in the morning, I fished with your dad, Samuel. Your father and mother were with you at your grandparent Bouchillion’s cabin when we had a great lunch and I cooked trout. After lunch you slept awhile,your mom and dad cleaned up the cabin (not really a cabin but a nice house). Aunt Jenny and Grandmother Michelle and I returned to town. They went shopping while I did a little more fishing. On the trout stream, I where I made these new friends, I enjoyed some time with other people who love fishing as much as I do. I gave them the address www.firstfish.weebly.com, and shared my method of making a handy stringer by picking up litter (a plastic bag) and cutting the plastic into strips, twisting the strips and tying knots every four or five inches. to create a cord like fish stringer. Anyway, the recycled plastic makes a good stringer if you have nothing else and my new friends had a more secure way of keeping their catch, than the fork shaped stick they were using!

The morning of fishing with your father was the beginning of a perfect day, when I began to align with a Spirit like living water, and it was some time during my interaction with the father and daughter, in the late afternoon, that I became aware of the spiritual alignment that is responsible for my recent Thanksgiving happiness. I realized that feelings are a matter of spirit and there are different spirits we can align with by choice and by Grace. I thought about how my son met his wife and considered the Bouchillion’s hospitality and friendship toward us and their life work with Campus Crusade for Christ (Cru), I thought about the enduring spirit of Jesus Christ and how His spirit has lasted for more than two thousand years and has touched humans on earth. It became very clear, while I was fishing, that Jesus’ feelings of Love for His fellow man described best in (1 Corinthians 13:4-7) are the perfect Spirit of God and God is love. When we align our spirits with love dear Samuel, we experience joy and wonderful friendships! 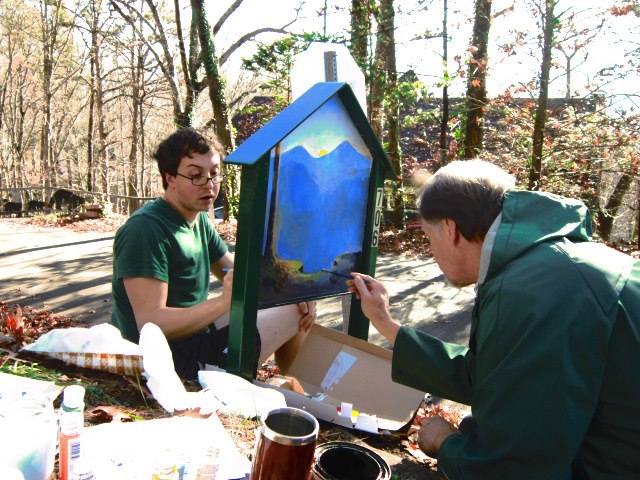 We paint for our room and board! 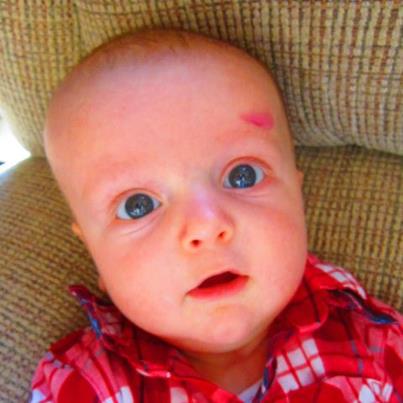 Your Mama says that when your father and grandfather are both artists, you can't help getting a litte paint on ya! 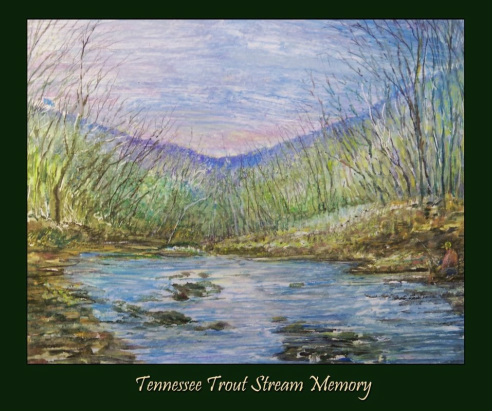